Nothing ruins a trip to the beach like having to navigate around or through piles of rotting seaweed to get to the water. This is why Sargassumhas earned a place on our list of the worst water weeds. This genus of macroalgae (seaweed), started making headlines back in 2015 when huge amounts of it started piling up and decaying on lovely Caribbean island beaches such as the Dominican Republic, Barbados, Antigua, and Tobago. Then it hit the Caribbean coast of Mexico, wreaking havoc especially in Cancun as well as Belize. It has also started appearing in large quantities on some Florida beaches. Hundreds of beaches have been affected while others remain clear depending on location. Check out the maps at Sargassum Monitoring for more information. Here’s everything you need to know about Sargassum. 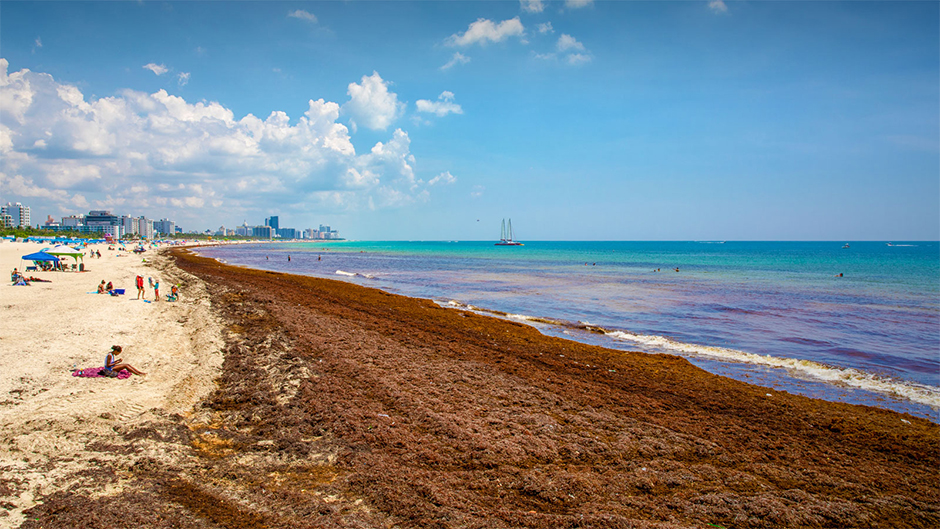 Scientific Name:Sargassum. Usually we present scientific names of water weeds with the genus (the first word) and then the species (the second word) because we tend to be focused on a specific species that is either exotic, invasive or both. In this case, however, there are more than 300 different species of Sargussum!

Origins:Sargassumis a totally natural, brown, “bushy” seaweed.Because it’s not exotic, there are many species that have essentially been around forever. The Sargasso Sea is a portion of the Atlantic Ocean well-defined not by land boundaries but by ocean currents (on the west by the Gulf Stream, on the north by the North Atlantic Current, on the east by the Canary Current, and on the south by the North Atlantic Equatorial Current). It was given its name in the 15thcentury by Portuguese explorers because it reminded them of the wooly rock rose often found growing in the water wells of Portugal, where it was called sargaço. The currents defining the Sargasso Sea result in large amounts of Sargassumbeing present there. On a side note, those currents also collect garbage in that area – the Sargasso Sea is the home of the ginormous North Atlantic Garbage Patch. 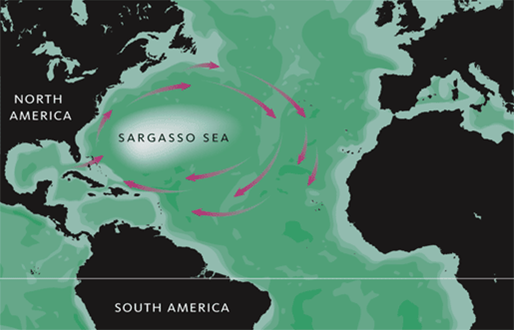 Habitats:The various species of Sargassumcan be found throughout temperate and tropical oceans. It typically likes shallow water and coral reefs. Some species grow attached to rocks and reefs but are broken loose during rough weather. Other species are able to thrive without ever being attached to anything.

Eco-Impacts: When it’s out on the water, Sargassumdoes serve as a food source for some species of herbivorous fishes and sea urchins. The seaweed patches also provide vital habitat to more than 100 species of various arthropods (shrimp, crabs, etc.), worms, mollusks, fish and even sea turtles.But when it washes ashore, it can become a serious problem. As described on the Sargassum Wikipedia page: “The algae wash ashore, pile up on beaches, and decay, often causing a foul odor, releasing fumes of Sulphur compounds that rust metals, can turn taps black in shore houses, damage modern conveniences, and cause respiratory problems, particularly for asthmatics. A doctor in Guadeloupe recorded 52 patients as having Sargassum-related symptoms. Insurance problems arise for tourist operators and homeowners, where the household and business losses do not fall into previous insurance categories. Wildlife also suffer; for example, sea turtle hatchlings die on their way to open water.” In fact, the infestation at Long Beach in Barbados killed 40 sea turtles that became entrapped in the giant raft of Sargassumthat washed ashore in July 2018. These giant mats of the seaweed can also pick up a lot of ocean garbage that can be hazardous to humans and animals alike. As for what’s causing the Sargassuminfestations that clearly have a huge negative impact on tourism and local fishing operations, at this point there are only theories. Warmer water temperatures and shifting current patterns, both of which might be driven by global warming and climate change may be the blame, as well as increased nutrients from agricultural fertilizers that eventually wash into the ocean. 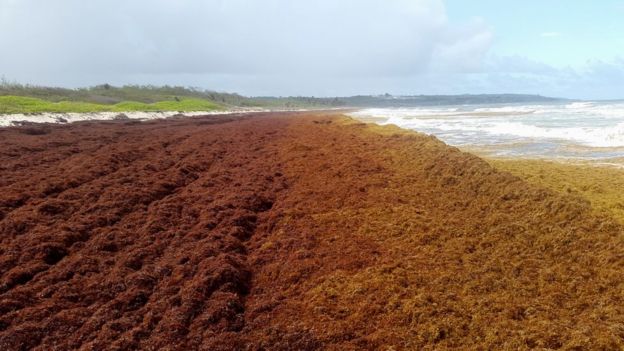 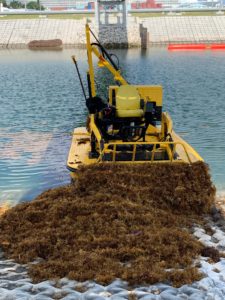 Once a raft of Sargassumwashes up on shore, you’re faced with the expensive challenge of removing it from the beach, which can also cause damage if the equipment used ends up taking a lot of the beach’s sand with the seaweed. The better approach is to be vigilant about identifying incoming mats of the stuff and get it out of the water before it washes ashore. Weedoo workboats are the ideal solution for this better approach.

Timely removal of Sargassumfrom the water also opens up the possibility of finding various commercial uses for the seaweed, though more research is needed for various ideas to become viable uses. Some have suggested animal feed, but some Sargassumtests too high in arsenic for that. Others suggest using it as source of biomass to produce bio-gas, but the supply would need to be regular (as opposed to the current “surprise” mats that suddenly show up) and collection would need to be affordable.

The Weedoo TC Series of compact workboats are ideal for Sargassumremoval as the seaweed can easily be pushed onto a low-profile floating barge or mat and hauled away for disposal or use. The rugged hull of a Weedoo TC workboat is constructed of fiberglass and Kevlar and features a deck-mounted marine boom cutter, front-end loader with universal marine bucket system, and T-1305 highway transportation trailer. Its cyclonic hydraulic system provides eco-friendly fluids to the high-efficiency triple-pump setup producing 27 GPM. The factory-installed power platform features a Kubota D902 3-cylinder liquid cooled diesel engine with electric start and alternator. The system includes twin propulsion outdrives with Weedoo Weed-N-Mud propellers and quick-change hydraulics for various aquatic work attachments and accessories. Contact us today with any questions you may have or to get a quote – we’re here to help!

Huge floating mats of Sargassum seaweed are washing up on beaches all over the Caribbean and Florida, wreaking havoc on tourismm, wildlife, and fishing.